Today is extra exciting because we have author Melissa Stewart here with us to talk about Ick! Delightfully Disgusting Animal Dinners, Dwelling, and Defenses, her incredible new middle-grade book from National Geographic for Kids.

Kaitlyn: Hi, Melissa, thanks for joining us today! Here’s my first question:

This book was inspired by a trip in East Africa in the 1990s where you observed “a mother black-backed jackal upchuck her partially-digested dinner to feed her three feisty pups” and then discovered that a kind of antelope called the gerenuk is “one of more than 150 mammals (including cows) that regurgitate their food and re-munch their lunch as many as four times.” These back-to-back experiences led you to start making a list of animals that “vomit their vittles as a survival strategy.” First off, that is super cool! Second, did you think this would turn into a book someday or did that come later?

Melissa: First of all, here’s a sneak peek at the black-backed jackal and gerenuk spreads in the book. Isn’t the design fantastic? Okay, now to answer your question: In my office, I have a large, three-drawer vertical file cabinet full of folders like the one with the “vomited vittles list”—each one represents a potential book. Every time I read an article or hear an idea that fits one of my categories, I add it to the designated folder. Over time, the information adds up, and eventually I may have enough information to start writing.

This approach takes a long time (24 years, in the case of Ick!), but it’s really the only way to gather information for a narrowly-focused concept book. I have to discover the bits over time and then figure out how to put them all together in a way that will engage young readers. Ick! combines lists I had about animals that use poop, pee, spit, snot, and vomit in surprising ways.

Kaitlyn: That’s amazing dedication, and based on this book, oh, so worth it! How did you choose which animals to include in the book? Were there any that you had to be cut?

Melissa: As I looked at my lists, I looked for diversity. I chose animals from a variety of classes (some mammals, some amphibians, some fish, some insects, etc.) and that displayed a wide variety of behaviors. I wanted some animals that were familiar, like the giant panda, and some that readers have probably never heard of, like the bone-eating snot flower worm. (Don’t you just LOVE that name?) 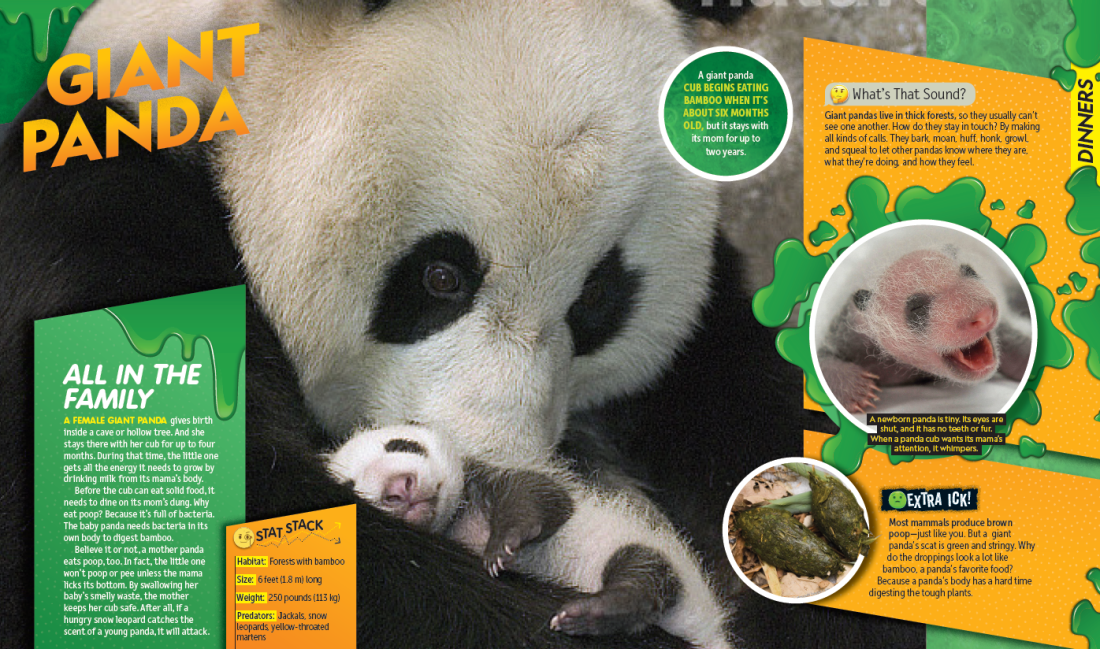 As I was revising with my editor, she let me know that she had doubts about five or six of the creatures I’d included. She asked me to replace them with other examples. It was her idea to add the hook-nosed snake, which farts as a defense strategy. (Amazing, right?)

Kaitlyn: Bone-eating snot flower worm and snakes that fart as a defense strategy? I’m WAY more than hooked! The photos in this book are incredible. How did you find them?

Melissa: All the credit for that goes to National Geographic’s super-dedicated photo-acquisition team. Of course, National Geographic has one of the richest photo archives in the world. Many of the images came from that archive, but in some cases, the NG team worked tirelessly to track down just the right images. A good example is the image on the bone-eating snot flower worm spread. That came from researchers at the Monterey Bay Aquarium Research Institute in Moss Landing, California.

Kaitlyn: Wow, I had never thought about how they seek out photos for these wonderful books, thanks for the great insight! What do you hope kids get out of reading this book?

Melissa: My website is called Celebrate Science because, to me, all my books are about sharing the beauty and wonder of the natural world with readers of all ages. My hope is that Ick! will fill young readers with excitement and awe about all the amazing ways animals survive in the world. 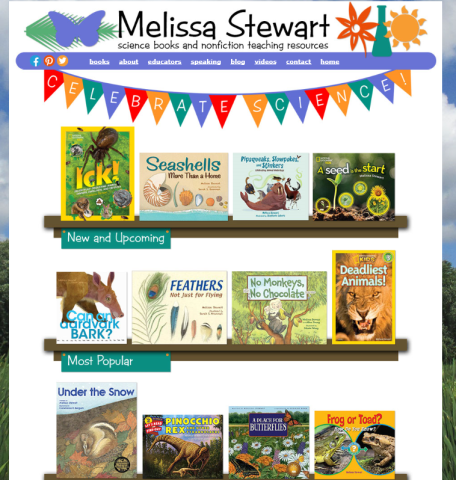 As I wrote the book, I also tried to include access points for children with different learning styles. For example, for kids who love facts and data and numbers, I included a Stat Stack feature that lists each animal’s habitat, size, weight, predators, and life span.

Melissa: I originally planned on having a career that involved writing and editing for an adult science-themed magazine, such as Scientific American or Discover. But when I graduated, the nation was in the midst of a recession and magazines were folding right and left. There were no entry-level job openings at all.

So I took a job editing high school science textbooks. When the economy recovered, I started writing magazine articles for both children and adults on a freelance basis, and found that I loved writing for kids.

Kaitlyn: It sounds like you found exactly where you were meant to be. How does your past experience as an editor inform your current work as a writer?

Melissa: That’s a great question. Spending time on the other side of the desk, so to speak, gives me insight into the many challenges that editors face in their jobs. Whenever possible, I try to do things in a way that will make their lives easier.

For example, because I know how important it is for a book to stay on schedule, in 25 years, I’ve never missed a deadline. Sometimes that has meant working until midnight or getting up at 4:00 a.m. to get a book in on time. Editors really appreciate this.

Kaitlyn: Meeting deadlines is so important! What other advice can you share with writers who are working toward publication?

I often meet authors who have recently published their first book and are disappointed that the experience of being published hasn’t lived up to their expectations. Writers tend to think that achieving this goal will make everything in their lives better, but you’re still the same person with the same life. And many people you know may not be particularly impressed by your accomplishment. They may not come to your book launch or buy your book. That’s why it’s important to write because it’s fun and rewarding for you and to enjoy the process rather than focusing on accolades that may never come.

Kaitlyn: YES! Celebrate every little thing and do it for passions, that’s definitely what writing for kids is all about! Can you share what’s next for you?

Melissa: Due to the pandemic, publishers are postponing quite a few books. It’s hard to say exactly when a particular book will be published with certainty. But here’s a sneak peek at a book that’s scheduled for publication in Spring 2021.

Summertime Sleepers: Animals that Estivate is illustrated by the uber-talented Sarah S. Brannen and published by Charlesbridge Publishing. I can’t wait for you to see the whole thing!

Kaitlyn: We can’t wait either! Summertime Sleepers: Animals the Estivate book sounds super interesting, just like Ick! Thank you so much again for joining us today!

Melissa: Thanks so much, Kaitlyn. It was my pleasure. 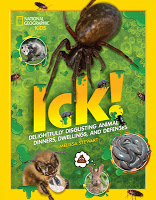 Get ready to be totally grossed out as you discover the incredibly icky ways animals eat, make their homes, and defend themselves.

From ants to zebras, you’ll discover some seriously strange animal behaviors. Slurp up soupy insides with houseflies, spit sticky saliva to build nests with birds, and fend off predators with poop-flinging caterpillars and farting snakes. And that’s just the tip of the dung pile! These yucky habits may seem surprising to us, but they’re totally normal for these animals. In fact, their survival depends on them.

Lively text, incredible photography, and all kinds of fun features make this book a must read for curious kids. Ready to chew some fingernails with cockroaches? Dive into the disgusting world of animals!

Melissa Stewart has written more than 180 science books for children, including the ALA Notable Feathers: Not Just for Flying, illustrated by Sarah S. Brannen; the SCBWI Golden Kite Honor title Pipsqueaks, Slowpokes and Stinkers: Celebrating Animal Underdogs, illustrated by Stephanie Laberis; and Can an Aardvark Bark?, illustrated by Caldecott Honoree Steve Jenkins. Her most recent title is Ick! Delightfully Disgusting Animal Dinners, Dwellings, and Defenses. Melissa maintains the award-winning blog Celebrate Science and serves on the Society of Children’s Book Writers and Illustrators board of advisors. Her highly-regarded website features a rich array of nonfiction writing resources.

PS Have you heard about #KidlitZombieWeek that my critique group (6 Ladies and a MANuscript) is holding this month? Follow @6and_MANuscript to get the low-down on our event to help you revise your dead manuscripts, and don’t forget to share with all your writing friends!